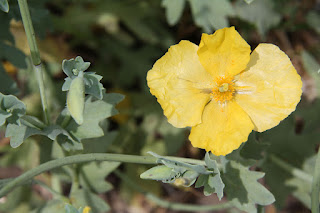 I noticed, during my garden walk the other day, that my Yellow HornedPoppy had seedpods that were ready to pop. Now if you're into seedpods, as I am, those on the Horned Poppy are an absolute delight. First of all, they are long – really long, as in up to 12” (30 cm) and almost as narrow as the stem. When they first form and are green, it's hard to tell where the stem ends and the seedpod begins. However, it's very easy to tell when they're mature- the pods turn a dark brown and if they're ready, the pods will easily snap off the stem; if not, you can tug and twist with all your might and they won't budge. Opening the mature pods takes a simple twist and the seeds literally fall out. And there are so many of the tiny, little things! They run up and down the whole length of the pod – easy to figure out why this plant is a self-seeder.

Long, curvaceous seedpods!
I can't figure out why this plant is not more common in gardens. There is so much to love about it! The foliage itself makes it garden-worthy: the highly-dissected leaves are a bright silvery- blue and grow in a lush mound, providing visual interest all season. The pale yellow flowers on 24" stems are produced in abundance continually from July to September and as the flowers fade, those incredible seedpods begin to form. All in all, it's quite the conversation piece. On top of that, it's a pretty low-maintenance flower, growing best in poor soils, and it can handle variable growing conditions, including drought. 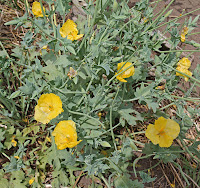 The Horned Poppy has a long history of cultivation. A native of the coasts of much of Europe and the Mediterranean, it was a cottage-garden favourite for hundreds of years and was grown extensively in England and Ireland. Gerard described it in the 16th C. Immigrants brought it with them to settle the New World and it flourished here, naturalizing along the eastern U.S. coast. Settlers did discover, 'though, that our harsh winters necessitated growing it as an annual rather than the short-lived perennial it is in Europe. An 1827 Ontario seed catalogue lists it as one of their offerings of annual flowers. Mine, however, have survived milder winters in our Zone 5b gardens.

To grow the Horned Poppy from seed, start it indoors in winter. The seed benefits from stratification (which means providing it with a cold spell to break dormancy), so after pressing the seed into moist, soil-less mix and lightly covering with mix, place a plastic baggy over the top and place it in the fridge for 6-8 weeks. Then remove the pot from the fridge and place it under lights. Or if you're lazy like me, simply place the pot of sown seeds outdoors in winter in a sheltered spot (without the baggy!) so it can experience the normal freeze-thaw cycles.

I'm really excited to have harvested our first organic seed crop from our Good King Henry plants! Here are some interesting facts about this rarity of rarities in cooler climes - a perennial vegetable. 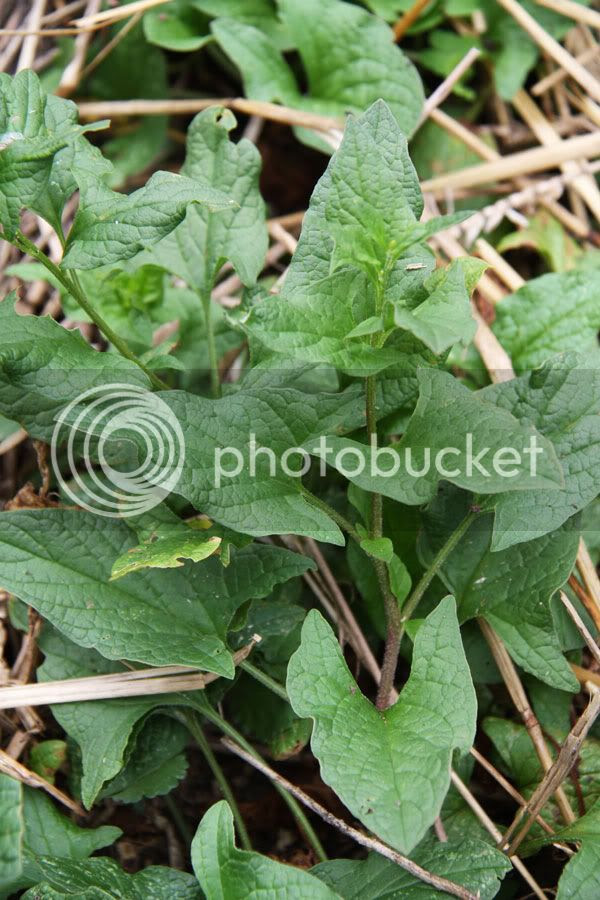 Despite its illustrious name, this venerable plant served the peasant class in Europe for hundreds of years. Known also as" Poor Man's Asparagus"," Lincolnshire Spinach", "Allgood", "Fat Hen", "Smear-wort" and "English Mercury", it was valued as a spinach and asparagus substitute and pot-herb. Its species name means “goosefoot”, which refers to the shape of its leaves, and it's related to other edibles such as Lamb’s-quarters (C.album), quinoa (C. quinoa) and StrawberrySpinach (C. capitatum).

Although it was a garden staple in much of Europe from the time of the Romans, it fell into disuse by the early 1900's. However, with the recent surge of interest in home vegetable gardens and slow cooking, it's time to take another look at this plant: it's a perennial vegetable (to Z 5), is relatively easy to grow and largely resistant to pests and diseases. Its common name is believed to have originated in Germany as simply “Good Henry”, meant to distinguish it from “Bad Henry”, a toxic plant found in the wild.  “King” seems to have been added when it came to England (no-one knows quite why) and many myths developed around the source of its names, including that it was named after Henri IV of France, who had promised every peasant a chicken or fat hen in his pot. “Fat Hen”, by the way, referring to its use as poultry feed, is actually a misnomer – it's meant to apply to its cousin, Lamb's-quarters, which were the species used to fatten poultry. The second half of its botanical name translates simply as“good henry” - although the bestowed royal connections may have appealed to the commoner's fancy.

Prized as one of the first greens to emerge in spring, its young shoots were harvested, peeled and cooked like asparagus and the leaves were picked regularly for use as a pot-herb. So important was it considered that European colonists brought it to North America with them to establish in their new gardens.

Growing to about 12” high and 18” across, it first produces young shoots in early spring that can be harvested when pencil-thick and cooked like asparagus. The dark-green, triangular leaves next appear and can be continually harvested, although older and later leaves tend to be more bitter. We have discovered why it was so popular as a pot-herb, as even the young leaves are a bit too bitter for fresh eating for us. Why fight history? The peasants had it right – so cook it as you would spinach or stir-fry it as we do. The bitterness can be reduced by soaking the leaves for a half hour in salted water, then discarding the water. They are especially rich in Vitamin C, calcium and iron, so they're a great addition to your diet.

Like most ancient garden plants, Good King Henry also had medicinal uses. According to “A Modern Herbal”, written by M. Grieve in 1931, it had “excellent remedial qualities in indigestion” and the seeds were considered to have a mild laxative effect.All parts of the plant were used. The name “Smear-wort” comes from its use in ointments and the leaves were regularly made into poultices to clean and heal chronic sores. Gerard, in the 16th C., wrote that these poultices “do scour and mundify” sores resistant to healing ("mundify" - what a great word! It means to cleanse - I'm going to try and work that into my vocabulary). The roots of the plant were even used to feed to sheep to cure coughs.

Since it is a perennial, Good King Henry is best planted in rich, fertile soil that has been well-worked with good drainage. We have ours in full sun and it has flourished although it can also handle partial shade. Growing it from seed can be a challenge as it is a slow, erratic germinator. Moist-stratifying the seeds for several weeks before sowing increases germination rates. It doesn't like to be transplanted, so sow it where you mean to grow it. Like many plants that are trickier to germinate, they self-seed quite readily once established. This is a good thing, since we have found that in our Zone 5b garden it can tend to be a short-lived perennial. Direct sow in the garden and thin to 2' apart and don't harvest anything the first year – just let the plant work on getting established. Shoots should not be harvested until the plant is three years old. The fairly nondescript flowerheads are produced in abundance and if you leave some to dry on the plant you can gather your own seeds fairly easily. All members of the Chenopodiaceae family are outbreeders and wind-pollinated, meaning they have to be isolated by several miles to ensure varietal purity. However, Good King Henry is the only known variety in its species so saving pure seed should not be a problem. Wait until the seedheads are completely dried before harvesting the tiny black seeds.We just run our hands up the stalks and the seeds, if ready, easily come off into our hands. Cleaning the seed is easy - just blow off any chaff.

Posts from the Past